The creation of Street Fighter 2: The World Warrior is a story of idealism. It reads like the creation story of Star Wars: a congregation of young creators that dreamt so big it seemed impossible they would succeed. But they did. The only thing that was found lacking in the finished product was that soon after release, players wanted more. 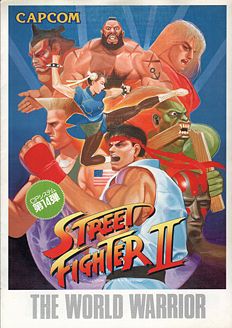 Noritaka Funamizu was 24 years old when tasked with “reviving” the series by Capcom leadership. The priority at the time, according to him, was to make the game visually interesting and fluid, rather than worry about gameplay balance. Each of the 12 characters was given an individual designer to be made as unique, distinct, and compelling as possible through their shape, colours, and animation. Decades later, it’s standard industry practice, but at the time, not many game studios would spend the time to make each character utterly distinguished from every other. It takes time and many iterations to arrive at a unique combination of complementary designs that work.

The biggest problem of Street Fighter 1, the controls, was nailed down and resolved. This time around, the characters reacted smoothly to the player’s inputs, and the special moves had far more reasonable timings. Players felt in control.

The new hardware available didn’t hurt, either. For the first time, the designers were able to allocate different amounts of computer memory for each character, allowing for very tall and very wide characters, giving the designers more options to make unique silhouettes, as well as offering players a variety of body types to use as avatars.

The music, while often lauded, isn’t usually given credit for its success. But again, like any watershed movie, the music played a big role. Yoko Shimomura was 22 when she began composing music for all the game’s different stages, and her music remains culturally relevant to this day. In keeping with the theme of audience familiarity, she chose to use instruments and compositions that either sounded familiar (and again, in many cases relying on stereotype), or, in a few questionable cases, borrowing riffs from movies. But it worked.

Again, let’s not pretend these aren’t stereotypes. But they worked. These tunes were compelling, catchy, foreign-yet-familiar, and gave the game that much more life. The soundtrack is widely considered one of the greatest ever made for a video game.

The game was an instant success, and it caught on equally in Japan and North America. It success became a problem: players were getting very good at the game and started demanding more, and black-market hackers that were desperate to get in on the action started selling illegal hacked versions of the game, sometimes with modifications to the gameplay. The “Rainbow” hack of the game made the game about 3 times faster, which some preferred to the default game. There were also some game-breaking bugs found, in some cases that made certain characters unbeatable. Capcom had to do something about the hackers and the bugs, and began to worry about the demands of the players.

A totally average video gamer's chronicle of the most successful arcade fighting game series in history.

Got any spare quarters?